Luca Toni, a sample which made ranks to achieve success, one which has never spared. His story is an inspiration to all young people who want to cultivate a dream: it grows as a trainee with Modena since the age of 13 years, and in 1994-95 he made his debut with the earnest in C1. Is taken into partnership by Empoli who runs at fiorenzuola and has a hard time because it's often relegated to the bench and thinks he quit football but the following year move to Langley where he started to score goals in bunches that won him the ransom from Empoli who turns to Treviso where he also scored several goals here. 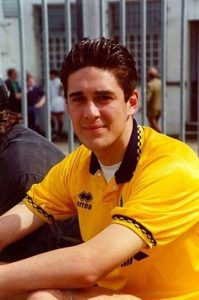 The Vicenza notice him and takes him in serie A at 23 years but Luke we see that is talented and Gino corioni, President of Brescia, buy it. Before the second season due to an injury aren't going to get better. Starts the climb of tones to the Olympus of football. Switch to Palermo in serie B, wins the title of top scorer and Palermo in the uefa Cup and was bought from Fiorentina. The first year wins: leading scorer and Golden boot and will be part of the shipment to Berlin Blues. In 2007 goes to Bayern Munich where he rips one record but after 2 years is transferred to Rome. Fails to engage and share from Genoa side rossoblu but things do not go to the best and agree the bench at juventus. Choose to migrate in Saudi, but he is too strong for those leagues and return to Fiorentina, old love, but he realizes that there is no place for him. Comes the Verona. And writes them unforgettable chapters, where he won the top scorer at the age of 37 years. A piece of history that goes away, but one that has always struggled for football.