The young Marcus Rashford, born in Manchester on October 31, 1997, after nearly ten years as a trainee with Manchester United, he was noticed by the Red Devils coach Louis Van Gaal who decides to bundle it with first team in 2015-16 season. His debut among the professionals arrive on February 25, 2016, in the Europa League match against Lyon at Old Trafford, when he replaces the injured Anthony Martial starting lineup in warm-up just minutes from the start of the match. In his debut among the professionals makes for twice making him the youngest player in the history of Manchester United to score in a European match just 18 years and 117 days, beating the previous record of George Best (18 years and 158 days).

Given the excellent performance in the Cup, is deployed between the owners in the Premier League match against Arsenal on February 28: on his debut in the competition marks another decisive victory again scored twice, and the Red Devils (3-2).

On 20 March decides the Manchester derby, won 1-0 for the field of the City, thus becoming the youngest footballer of United to sign a network in this Derby and tearing so the record to his teammate and Captain Wayne Rooney.

Likely outsiders and added value in the Department advanced the England national team might be the class of ' 97 Marcus Rashford owned by Manchester United.

Footballer physically up 1.80 or so and well laid out but the semblance and has muscles still waiting for full maturity. 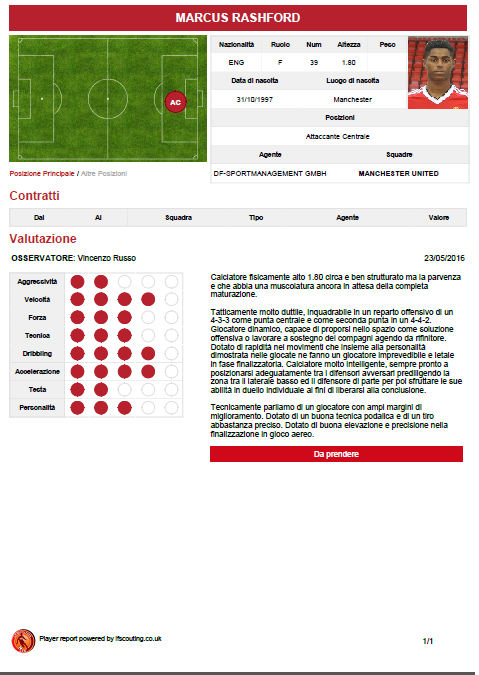 Tactically very ductile, framed in a 4-3-3 offensive of a Department as a centre forward and as a second striker in a 4-4-2. Dynamic player, able to propose itself in space as offensive or working in support of fellow acting as trimmer. With rapid movements which together with personality demonstrated in unpredictable and lethal Player play make it a finalizzatoria time. Very clever footballer, always ready to position themselves appropriately between defenders opponents preferring the area between the low side and the defender of part and then exploit his abilities in individual duel for the purposes of RID at the end.

Technically we're talking about a player with ample room for improvement. Equipped with a good technique and breech of a quite accurate. With good elevation and precision in finalizing it in the air.