There is No optimal category to analyze a team and prepare the best a race, even in the third series you can!

Let's try to analyze a C-Series match by highlighting the benefits of an opponent's study and how it could bring benefits in any category. It is Not enough to have only the quality of the players, but you always need a correct preparation of the race and a thorough knowledge of the weaknesses of opponents of opponents.

"Icarus, proud of his new art and kindled by the desire to climb more and more, moved away from the middle Road where his father flew. The proximity of the Sun made the wax soft, melted it and a little at a time fell down from his shoulders the pens. He then began to dash till he vanished into the waves of the sea "

The Catanzaro of Mr. Auteri arrived at the external match of the Lamberti of Cava dei Tirreni after the 3-0 inside of the Sicula Leonzio that had interrupted a period of not happy made of 3 negative results suffered by Rieti, Catania and Bisceglie but that he still saw the Calabrian orbitate in the upper zones of the ranking of Group C of Series C. On the other side, among the friendly walls, was opposed to the Cavese of Mr. Modica Zemanianus that, after 10 consecutive and fresh results of the biennial renewal, was found at a height 40 pt behind the Zone play-off but reduce from the punitive withdrawal of Sturno, wanted by the president who has not digested the 3-0/3-3 (in Comeback!!) in the House of the Makes, considering, probably, his team at a time of mental decline and that needed to recover the concentration Away from families and fans. 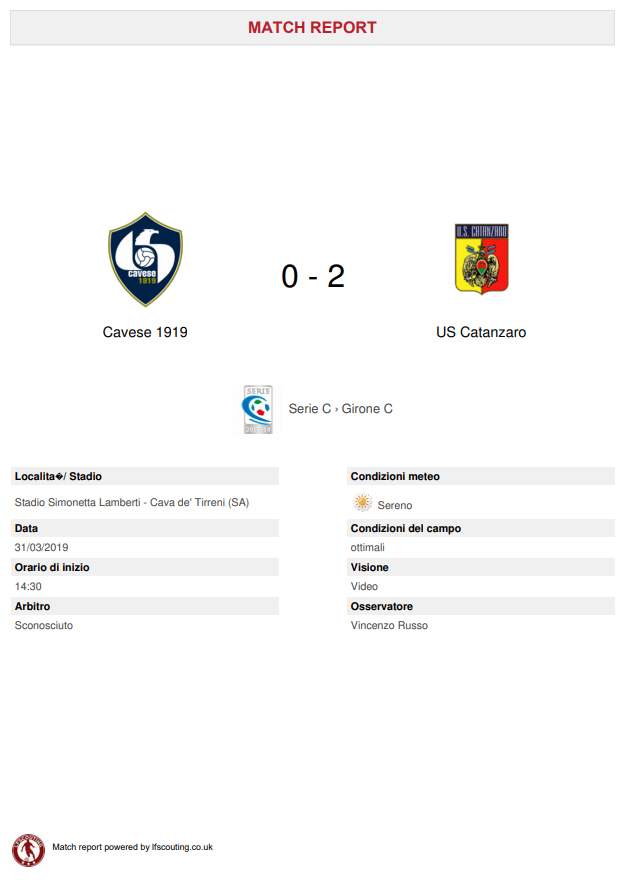 Auteri arrives at Cava proposing his now consolidated 1-3-4-3, conscious of being able to say his and impose his own game, as well as a team with important ambitions. On the other side Modica proposes an unpublished, and little Zemanian, 1-5-4-1, son of injuries and absences of the various Migliorini, ROSAFIO, Favasuli etc but potentially and probably voluntarily chosen to curb opponents more than keep unchanged the Its philosophy of offensive gameplay, potentially being able to count on alternatives never exploited of young people of prospect, at least according to the management Metelliana, or of players, always praised as potential reinforcements of the market of repair. 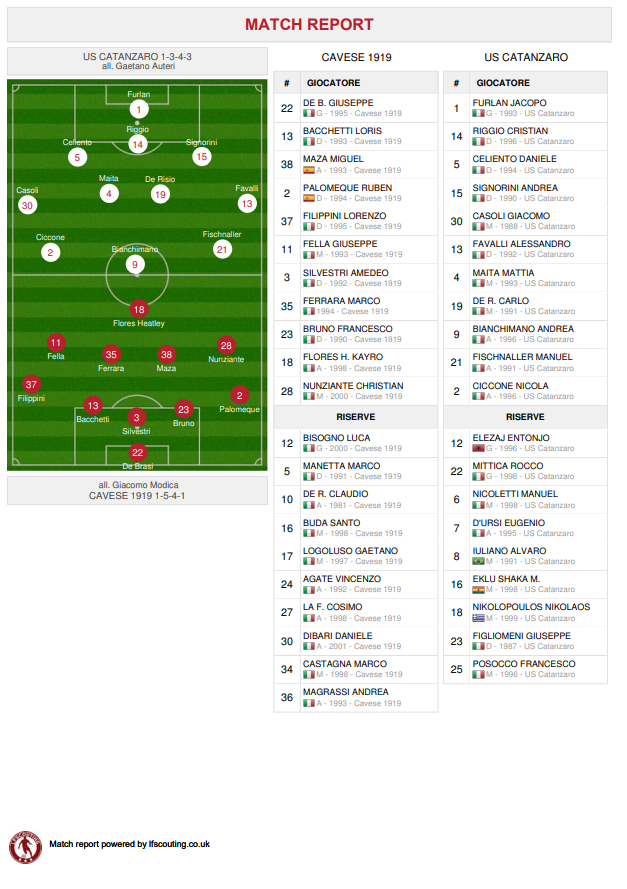 Easy to analyze the tactical dish towel of the race, clear from the first minutes, the Catanzaro free to set from the bottom with the Cavese completely below the ball line, holed up between the second and the last third of the field. In not possession the Metellians carry Nunziante and Ferrara on the two internal guests with Heatley to create additional numerical superiority working between these two and the three central opponents but without ever venturing into solitary pressures. Maza lowers to act as a low summit trying to occupy the intermediate spaces and working from screen and Fella on one side and Palomeque on the other they rise to manage the fifts of the 3-4-3 Auteri. All right if it were not for the wrong exit at the pressure of the "quarters" of the midfield metelliano on the central defenders of the guest side that frees the easy play on the fifth part that, combining with the interior in support, creates many dangers to the rear guard Both in terms of potential direct attacks and the circumfation of central density and finishing from the field fund, the situation on which the first occasion of the Casoli race arrives.

If you want to analyze the team of Modica, the real Achilles ' heel, were the inactive balls from which he has all too quickly and granted without ever adapting or remedy the opposing solutions. Similarly, after just 2 ' 30 ' ' The Metellians, cause double corner beaten close to the first post, are likely to capitulate on the aerial deviation of Fischnaller.

Doubtful Episode that he could unlock the race takes place at the minute when Maita in internal percussion is landed by Bruno, for the extreme defender is free kick from the limit, but there remains some doubt, also seen the vehement protests guests.

Catanzaro Master of the field that proves his superiority even when the Cavese, with pride and heart, tries to press high, but without troubling opponents, always cold and effective in phrasing in the strait.

In Spite of the territorial domination of the guests is the Cavese that at the quarter of an hour of the first time has the opportunity to unlock the match by exploiting the only defensive smear of the men of Auteri who reject short on a development from the sideline favoring Palomeque finishing for Hatley hitting the net by finding Furlan ready and the referee I read the offside position of the guest center forward.

The expert coach Auteri of Catanzaro already had the best of Cavese of Modica surpassing the freshman C Series with a bombastic 5-2 dated September 2, 2018 son of a blatant unpreparedness collective tactics, despite almost 1 month of pre-season withdrawal, And of a backward department, not of category, in difficulty in reading the uncovered ball which carried 4 nets suffered on developments in direct attack. 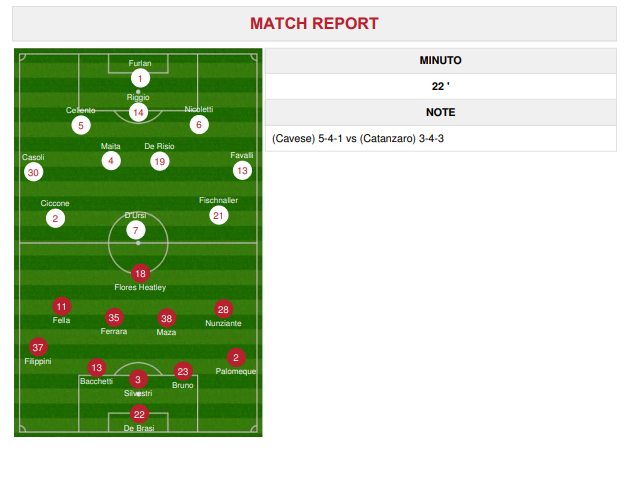 Variation of alignments realized in live with the software of Lfscouting

At the 22nd minute, the guest technician proves to have "read" and "understood" the match and its performance. Cause injury of Bianchimano and Signorini, inserts Nicoletti and D'ursi with the latter, quick and intelligent player tactically, which provides a concrete solution vertically, giving greater danger to the play in direct attack. The men of Modica continue to propose the same tactical dish towel of the Italian Cup competition at the end of the summer, once again a rapid wall climb with slow readings by the rear not very fast to undo the depth by managing the Better the direct opposing solution.

Note how the fifth network suffered in Catanzaro and the development that leads to the penalty kick of the 0-1 to Cava dei Tirreni have matured from the same error, at a distance of almost 7 months, the department and the same single defender, Silvestri, symptomatic probably also Of a study on individuals to steal information necessary to contain them but at the same time put them in trouble.

The first fraction of the game closes with a little cynical and naughty Cavese that can not capitalize the few but sharp occasions had. The Catanzaro concludes the first fraction of the game with regret since at 47 ' had the "match ball" to close the race that has wasted after a development in transition with Favalli that ended diagonally finding the decisive deviation of De Brasi.

In the second fraction of the game Modica renounced the tactical plan with which he had potentially prepared, erratedly, the race and reproposes his usual 1-4-3-3 by removing from the field Ferrara and Silvestri to insert the center forward Magrassi and the mezzathe Logoluso, Symptomatic fact of a concrete will to recover the result trying to show the type of game that has brought up to now the Cavese among the surprises of the league. 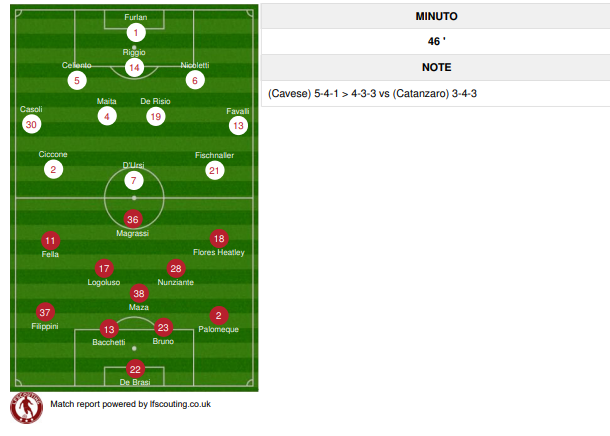 Variation of alignments realized in live with the software of Lfscouting

In Spite of the tactical change and the shuffle in the field of the players available, the difficulties for the team of Modica remain almost the same. The Rear guard continues to manage poorly and with little efficiency the vertical play of the opposing team with the low sides too proactive and easily attached to the shoulders by divergent cuts of offensive terminals opponents.

The two teams faced each other with Modica open face which gave bottom to almost all the arrows in their own quiver trying to maximize as available and exploit the opportunities from idle ball.

Just a development of a side free kick schematized betrays the Sicilian technician. Maza finishes at the limit for the Overshortened Logoluso which concludes first intention. The throw is defeated by the rear guest with Chestnut, man in the limit for the second ball, which lacks the intervention by bringing the ball to D'ursi that can so bet and overcome Buda, too high and little "bad" in not intervening on the direct Opponent launched to the net when it might. D'ursi launched a network tackles De Brasi in 1v1 and beats him on the far pole closing in fact the race.