The German national team develops its own game through a dense network of passages (770) very accurate (88%) aimed at a territorial dominion of the field trying to earn the last third predisposing the entire workforce in the opponent’s half and finalizing in the spaces accorded not played coded, making them quite unpredictable and hardly interdibili. On the other side there is the more direct and less primly in France played (581 steps with 86% accuracy) focused to reach the last third of the field in order to trigger the most representative field areas who prefer men. On the one hand, the Germans have more quality in the midfield as to afford repeated ball possession (on average over 66%) and the ability to choose wisely where to attack the opposing teams taking advantage of the constant off-the-ball movements and Raiders offensive midfield Terminal. On the other hand, the French have a more direct game aimed at exploiting the weaknesses of the opponent’s possession and not tactical arrangement characteristics of offensive and terminals of midfielders in support. Both teams have an average of conclusions toward the opponent’s goal quite high (21 to 17) with an accuracy in the same in favour of the Germans.

Muller, Thomas (German, class 1989) – having the absence through injury of Mario Gomez, will probably be the Central finalizzatoria time of game flow. Player ductile, with great personality and international experience that led him to be highly sought after by both the construction phase of the game. Capable of kicking almost indiscriminately with both feet (80% accuracy with weaker foot), with a great shot from distance and great physicality that makes it equally dangerous even in the air. Player from the great tactical intelligence that led him to be unpredictable in their movements due to its propensity to garrison indistinctly the trocar (57%) as support for the maneuver of the midfielders, the left lane to act as wing and trimmer added (30%) and rarely appears static in central position (13%). His technical skills and a strong intelligence degrees, the result of years of work at a club like Bayern making choral its mark game tactics, making it one of the most lethal strikers and prolific of technical management of Low despite European finisher in this most distinguished as that as mere finalizer. 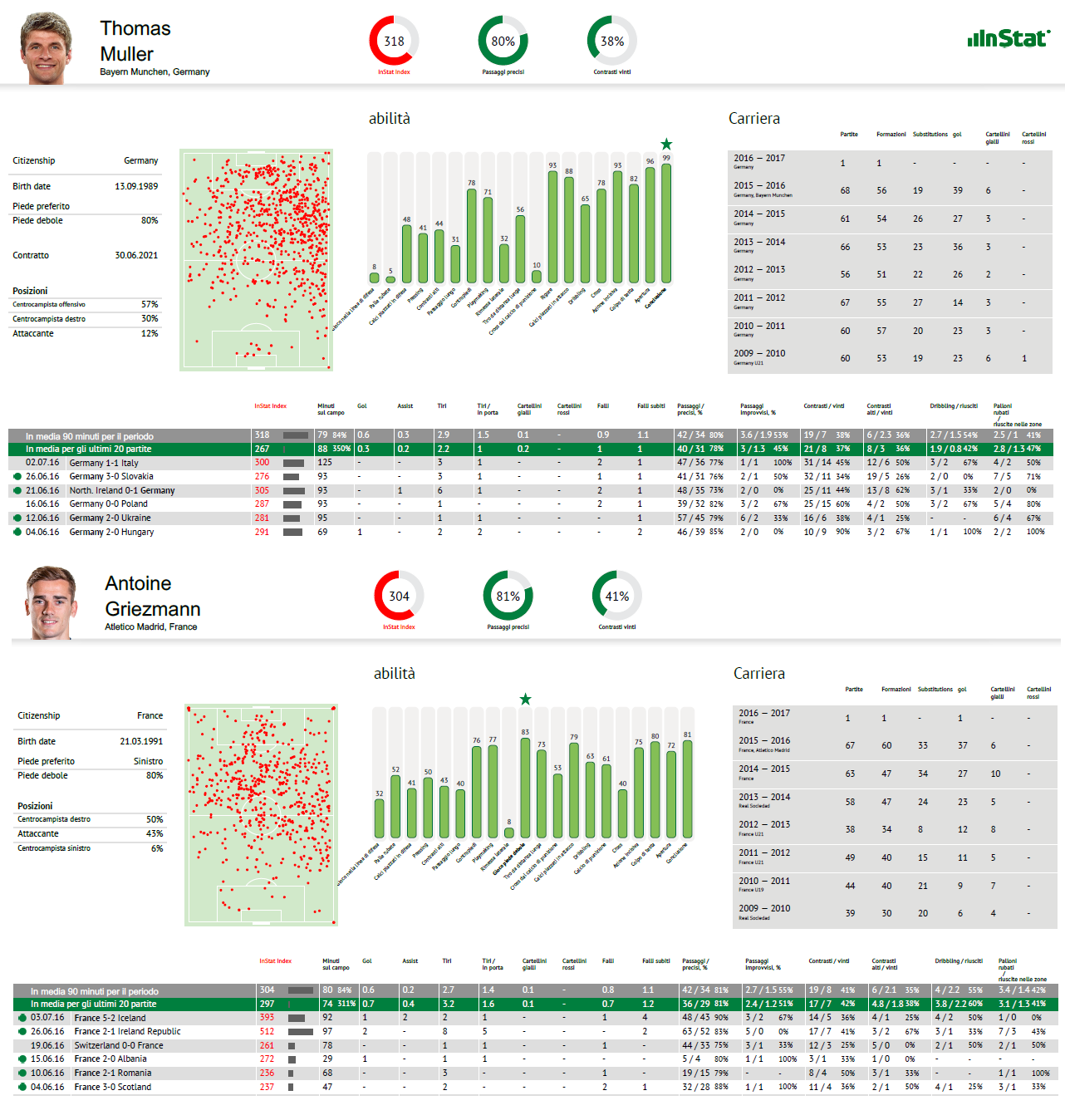 Griezmann, Antoine (French, class 1991) – is the core gameplay of the French maneuvering behind the last third of the field: game flow being set (81 percent), passages correctness when aims behind the midfielders, and first choice in attack as both trimmer (2 assists decisive in this) that as Director (4 NET in this). Very mobile player, with discreet physicality but excellent athletic skills that make him a constant threat to opposing both hovering on the outside rear bases (56%) than if the central space (43%) to act as a playmaker behind the centre forward or a couple in a different game. Unlike expressed at his club that was harnessed in tactical details even in non-possession, dictates the freer to express themselves is left much to be able to make the most of his potential with the possibility to choose where to go and what space attack.