Bayern Munich (1-4-1-4-1) and Atletico Madrid (1-4-4-2) are diametrically opposed in terms of gameplay, both during the offensive that defensive.

On the one hand you have the “Guardiolismo” that revolves around the principle of rule of the game developed with a 73% to 27%) consolidation of possession (made by a large number of 85% to 57%) pass with precision (short-range (589 to 200) to allow within organic prepared in the opponent’s half and then exploit any spaces granted to finalize the offensive action in the last third of the field. On the other you have the “Cholismo” developed out of a constant defense of space, creating online ball trying to recover the ball behind density through constant aggression on opposing ball carriers or on the closure of the possible lines to eventually trigger damaging phase changes by exploiting the pre-emptive positioning of advanced terminals. 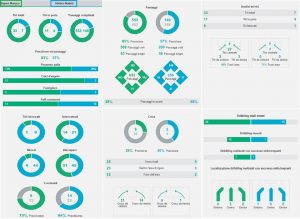 The style of play of the two sides differ already in terms of building the game. While the Germans attempt to control the entire field by directing your own plays both on the exterior and in the central area, the Spaniards play preferably vertically with 149 steps forward on 259 count (of which 56 long balls) sign an attacking football aimed at reaching any time soon of the last third of the field.

In terms of attacking play the German team is most present in the opponent’s half with numerous hazards created as evidenced by ben 11 33 conclusions set out in the mirror of the door against the 7 and 4 of the Spanish team. These many conclusions as German Central external finish combinations are so (35 to 5) with ben 27 Central conclusions against the Spanish 7.

In terms of defensive game the two sides are equivalent in terms of efficiency. On the one hand, there are the Germans adept in applying the principle of immediate recovery of the ball (51 to 45), on the other the Spaniards more patients and more effective interception (14 to 21). From the point of view of the contrasts, the team of Simeon is asserting its physicality with a larger number of contrasts won (9/12 to 14/22) than to the Germans but in general character, considering the actual total number 75% to 64%), accuracy (is in favour of the Spaniards who, despite not seek physical contact preferentially, are more effective.