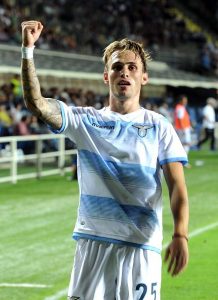 The jewel of Lazio protagonist to debut

First day of serie A. It is always a thrill for football lovers. But, in particular, our attention rests on a boy, young, laziale, newcomer. Christen onset among the greats with a goal is something that manages to a select few and he is one of them.

We're talking about Christian Lombardi, heavenly white-child prodigy. A life, a career, sweaty, deserved and obtained. Sure the road is long, and more, and will have many trials, but the boy's liver to break through it. The father, interviewed, talk about Christian like a guy ready to make any sacrifice to achieve his dream, perhaps the dream of that brother who unfortunately lost and now want to remember becoming important in football.

Passing from Trapani and Ancona until the dream called Lazio, the favorite team. A child in the fabric is not missing, but by filing there is the temperament. In the derby against Roma in the final spring became expel a foul. Maybe too much tension of the match played a bad joke and being a guy who has been through a lot he made that mistake.

But we are sure that, being able to restrict behavior, Italy will have at its disposal a young champion ready for an exciting new career with the colours white-blue.