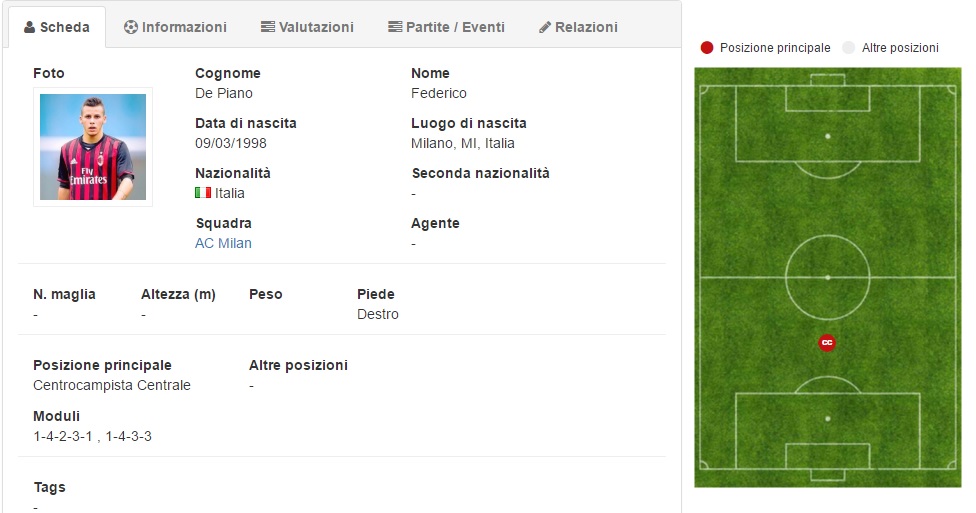 The 1998 generation of AC Milan is, according to many experts, one of the most prosperous generations and rich with young talent in Italy. It also includes Federico De Piano, simply known as Chicco. From 9 years in the youth team of Milan, is becoming, along with Zanellato, as one of the beacons of the midfield of spring by Stefano Nava. And his agent, Luis Vizzino, rightly is cuddling him: “Throughout the spring there was a pretty exciting start to the season by virtue of the various won tournaments in the summer. Even the Championship has begun in a positive way because they managed to bring home a good result. Then there was a general problem, though Frederick had to catch up on some physical shape as it should be. However, we were glad to him. It is aggregated and was part of the first team, he trains 1-2 times a week under orders from Montella. Definitely positive as begin considering the injury in the last year“.

An injury suffered in September 2015, far from trivial. Because the rupture of anterior cruciate ligament of the knee forced him to sit out for most of last season. Thankfully, after a year, became only a bad and distant memory: “Now is completely recovered and fully restored – says lawyer Vizzino –. Although it is clear that they are particular injuries. At the beginning you have to recover from the physical point of view, but also from the psychological, because there are fears of possible relapses. Lately I reviewed well. Right now is not yet at 100%, but it would be abnormal to the contrary. He has great strength and determination: he wants to return to the 110%“.

Strength and determination that led him to earn a Vincenzo Montella convened for the friendly between Chiasso and Milan twelve days ago. The presence on the bench is then followed the debut of the great, with the entrance onto the pitch by Suso: “It was cause for great satisfaction. Primarily for Federico, for it is he who goes out there and which are given the merits by considering the enormous sacrifices he made. Secondly, it becomes obviously a source of pride for all of us. The hope is that they can get new calls for other unofficial races and then who knows…“, the words of his attorney. Certainly not a coincidence. Just consider that his former band mates David and Lander are now part of the first team on a permanent basis. In short, the Milanese society seems determined to continue to focus increasingly on young Italian talents: “That is something that I would like to stress – says Vizzino –. I do applaud the Rossoneri’s management and, in particular, to Filippo Galli to as led the youth sector. Thanks to this careful work, was given the chance for young people to show off. I hope that the example set by Milan is followed by all companies because, beyond the results obtained, it is definitely an interesting project. My hope is that it points out a young side and give new impulses to Italian guys”. 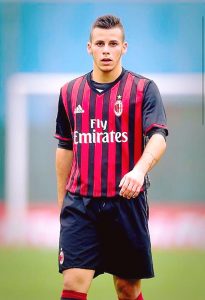 Returning to De Piano, his best qualities are those that are required of a director capable of making a difference. The agent has little doubt when asked to describe what are its characteristics and qualities: “He is the prototype of the modern midfielder playing in front of Defense. Has a high stature, but is very good with both feet. Being set covers the role of classical metronome. He’s the soccer player that all coaches would like to have. In recent years it has improved a lot in explosiveness and strength. If I had to choose a term of comparison as his model, I would say that it reminds me of David Pizarro. From my point of view looks like him for his way of playing“. While there are some who even compared him to a certain Marco Verratti…

Perhaps, however, in describing his class you should not omit another adjective. And the adjective is Rossonero: “He has always been in AC Milan. In 14 years he has been constrained as young 16 serial and it’s first professional contract“. But beyond class and talent, one of the strengths of Federico must be sought outside the rectangle of the game according to Vizzino : "his family is quiet and serene, lets work constructively without encroaching on other fields such as happens to many young people. Has an important role for him, I think that little bit extra that might help him in his career. Personally I admire very much the guy and I am convinced I can do well. Not only for its technical qualities, but also and above all to those of character ". Malaki since she was 9 years old, malaki forever? Meanwhile there is to untie the knot of a contract which expires next June 30: "we will make the necessary evaluations in due course. Now is not the time to talk about it. " To talk, as always, we think the field. Also for the bean.